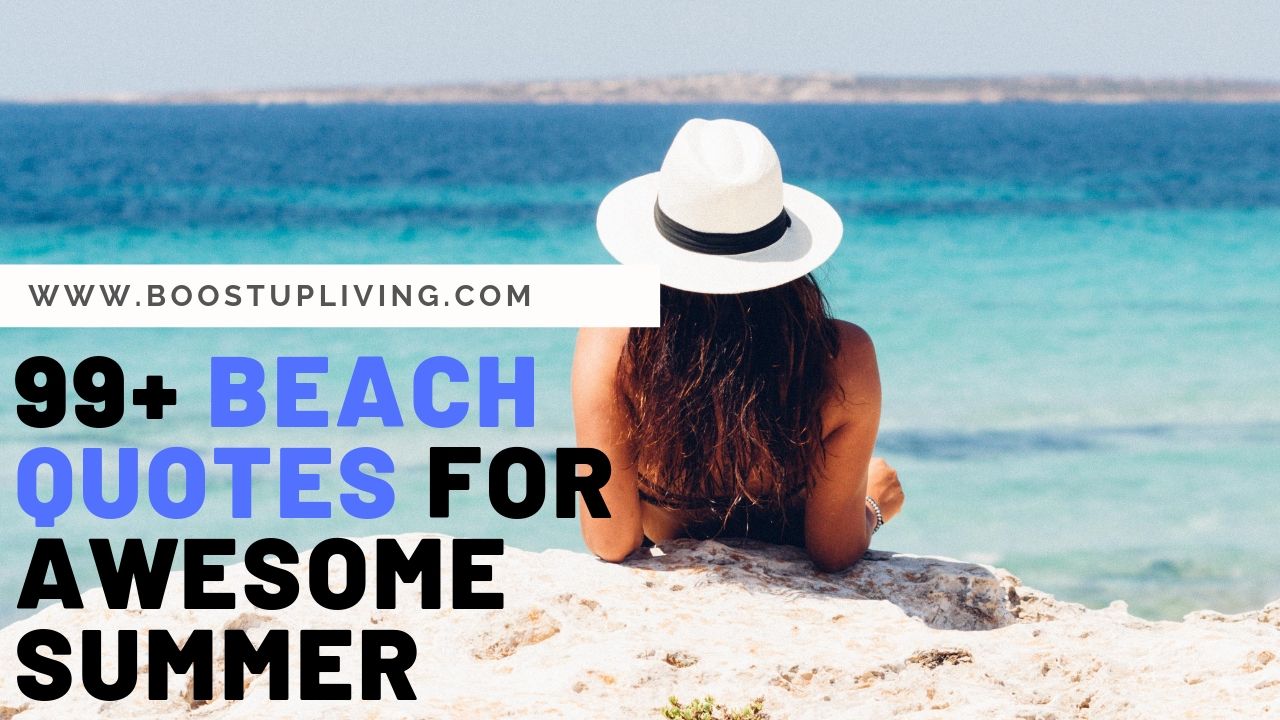 Hello people, Here boostupliving us back with awesome set of Beach Quotes For you, We strongly believe this collection will add more value for your life in the coming years. Here we’re adding a set of quotes in images plus quotes in text for you. First, if you’re a good fan of Quotes, try our quotes collection and keep in mind to add a bookmark.

Meet me where the sky touches the sea. tweet

Let the Waves kiss your feet & the Sand be your Seat. tweet

For her, the ocean was more than a dream, It was a place shee needed to visit to find herself. tweet

and when she returned to the city, You could see the sun in her eyes, The wind in her hair, and taste the infinie salt on her lips. tweet

Dear Ocean, Thank you for making us feel TINY, HUMBLE, INSPIRED and SALTY all at once. tweet

The oceans roar is music to the soul. tweet

Life is like a ocean. It can be calm or still, and rough or rigid, But in the end, It is always beautiful. tweet

Of all the paths you take in life, Make sure a few are SAND tweet

The sea once It casts its spell, Holds one in its net of wonder forever. tweet

LIFE, is like the ocean, It can be calm or still, and rough or rigid, But in the end it is always BEAUTIFUL. tweet

The ocean is everything I want to be, Beautiful, Mysterious, Wild and Free. tweet

I have seen the sea when it is Strong and wild, when it is quite and serene, when it is dark and moody, and all its moods, I see my self tweet

Drinking rum before 10:00 AM makes you a pirate, Not an alcoholic. tweet

We dream in colors borrowed from the SEA. tweet

I am a better person when I am tan tweet

There is nothing more beautiful than the way the ocean refuses to stop kissing the shore line no matter how many times it is sent away. tweet

If there’s heaven for me,
I am sure it has beach attached to it tweet

Smell the sea and feel the sky, Let your soul and spirit fly. tweet

Life is short Move to the beach and Don’t look back. tweet

The cure for anything is salt water, Sweat, Tears or the SEA tweet

The tans will fade away but Memories will last forever. tweet

Leave footprints of Love and Kindness Wherever you go. tweet

An ocean breeze puts a mind at ease tweet

We dream in colors borrowed from the sea tweet

I don’t fear death so much as I fear its prologues: loneliness, decrepitude, pain, debilitation, depression, senility. After a few years of those, I imagine death presents like a holiday at the beach. tweet

I enjoy art, architecture, museums, churches and temples; anything that gives me insight into the history and soul of the place I’m in. I can also be a beach bum – I like to laze in the shade of a palm tree with a good book or float in a warm sea at sundown. tweet

A good vacation for me is going to warm weather. Being able to go outside, in the sun, hit the beach, play outside sports. Being active outside. Going swimming, hanging by the pool, having a couple drinks, having a couple of your close buddies around, and just having a blast. tweet

A simple life is good with me. I don’t need a whole lot. For me, a T-shirt, a pair of shorts, barefoot on a beach and I’m happy. tweet

The sea does not reward those who are too anxious, too greedy, or too impatient. One should lie empty, open, choiceless as a beach – waiting for a gift from the sea tweet

Summer means happy times and good sunshine. It means going to the beach, going to Disneyland, having fun. tweet

I love the beach. I love the sea. All my life I live within – in front of the sea. tweet

I typically enjoy a beautiful beach destination, as I find the water and sand to be the most replenishing. tweet

A beach is not only a sweep of sand, but shells of sea creatures, the sea glass, the seaweed, the incongruous objects washed up by the ocean. tweet

After a long day at the beach, a hamburger and fries usually does the trick. tweet

If we were motivated by money, we would have sold the company a long time ago and ended up on a beach. tweet

Building a little bonfire at night on the beach and lying on a blanket with my wife under the stars is not only sexy, it’s romantic. tweet

My idea of relaxation is not lying down by a beach. I have to move around, do stuff. Though I’m a massive quiz show person. tweet

I do as many fun activities as possible. A lot of hiking, beach bike riding and walking. And cardio barre, which is a dance-based workout at a ballet barre. It’s a full-body workout for one hour on Monday, Wednesday and Friday in a studio. tweet

I say to the paparazzi, ‘Fellas, take your shot and go.’ It’s just they usually find me on a beach. tweet

Don’t be afraid to go up to the hot girl on the beach. tweet

When I think back to my childhood, I just think of the word ‘freedom.’ In the summers, we spent all day on the beach. tweet

Phew……. That’s wrapping up our post on Beach Quotes. Here We’re giving you extra special going along with Beach, Just check it out.

Happier than a Seagull with a french fry. tweet

After a visit to the beach, it’s hard to believe that we live in a material world. tweet

For whatever we lose (like you or me), It’s always our self we find in the sea. tweet

In one drop of water are found all the secrets of all the oceans. tweet

I look my best when I’m totally free, on holiday, walking on the beach. tweet

My love for you is deeper than the ocean. tweet

Thanks for Reading our 99+ Beach Quotes For Awesome Summer. Share this awesome set of quotes collection and use our quotes on your Instagram on this summer. Don’t forget to bookmark BoostUpLiving.com and Subscribe to our Newsletter for Fresh quotes Updates in the future.

What is your Favourite Beach Quote From Our Collection?