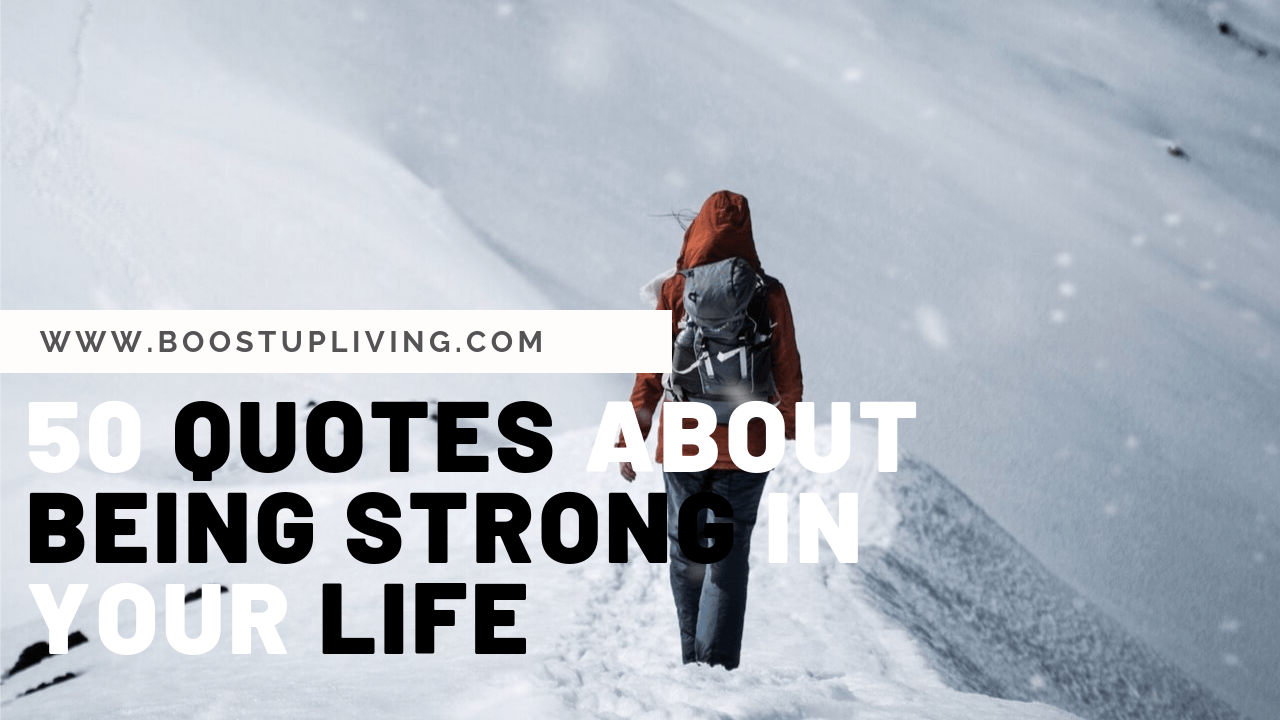 This is a collection of quotes about strength from boostupliving In life, there are so many situations we just need to be Strong, Such as Breakups, Work related issues, Family issues and thousands of reasons.

Why we just need to be Strong in those hard situations?

Because situations are not permanent, Things are changing, So situations too. If you got bad decision on hard situation, Your life will not the same after things are settled, Since that bad situation did a bad thing to you.

So here boostupliving us gathered a collection of quotes about being strong in your life, which will help you in a hard situation and move forward.

Your worst battle is between what you know and what you feel. tweet

Stay strong, Things will get better. It might be stormy now, But it can’t rain forever. tweet

Stay strong, Things will get better. It might be stormy now, But it never rain forever. tweet

You must tell yourself, “No matter how hard it is, or How hard it gets I’m going to make it” tweet

You may not control all the events that happen to you, By you can decide not to be reduced by them. tweet

Strength does not come from winning. Your struggles develop your strengths. When you go through hardships and decide not to surrender, That is strength. tweet

Someday, Everything will make perfect sense. So for now, laugh at the confusion, Smile through the tears, and keep reminding yourself that everything happens for a reason tweet

One of the happiest moment in life is when you find the courage to let go of what you can’t change. tweet

The strongest people are not those people who show strength infront of us but those who win battles we know nothing about. tweet

Be strong but not rude.
be kind by not weak.
Be humble but not timid.
Be proud but not arrogant. tweet

Work hard for what you want because it won’t come to you without a fight. You have to be strong and courageous and know that you can do anything you put your mind to. If somebody puts you down or criticizes you, just keep on believing in yourself and turn it into something positive. tweet

Be strong, be fearless, be beautiful. And believe that anything is possible when you have the right people there to support you. tweet

Be sure what you want and be sure about yourself. Fashion is not just beauty, it’s about good attitude. You have to believe in yourself and be strong. tweet

Dream, struggle, create, prevail. Be daring. Be brave. Be loving. Be compassionate. Be strong. Be brilliant. Be beautiful. tweet

I don’t feel like I have to be nice and apologetic all of the time. I’m trying to be strong and fierce. tweet

Quotes About Being Strong For Women

She was fierce. She was simple. She was crazy and always had something to say. She had flaws, But when she was down she got right back up she was a beast in her own way but one word describe her best
STRONG….. tweet

She’s a badass with a good heart, Soft but strong, unapologetic and honest. She is the type of women you go to war beside not againt tweet

Damaged women are the most dangerous kind, Because they already know they can survive. tweet

a wise woman once said “fuck this shit” and she lived happily ever after. tweet

Life has knocked me down a few times, it showed me things I never wanted to see. I experienced sadness and failures. But one thing for sure, I always get up. tweet

Think like a queen. A queen is not afraid to fail. Failure is another stepping stone to greatness. tweet

I’m tough, ambitious and I know exactly what I want. If that makes me a bitch, Okay. tweet

Life will test you but remember this, when you walk up a mountain you legs get stronger. tweet

And the salt in my wounds isn’t burning anymore than it used to. It’s not that I don’t feel the pain, it’s just I’m not afraid of hurting anymore. tweet

Nothing is more impressive than a person who is secure in the unique way God made her. tweet

Short quotes about being strong

If God brings you to it, he will bring you through it. tweet

Do not give up, the beginning is always the hardest. tweet

The struggle you’re in today is developing the strength you need tomorrow. tweet

Be strong because things will get better. It may be stormy now, but it never rains forever
Stay strong. tweet

You are so much stronger than you think. tweet

When life puts you in tough situations, don’t say “why me’, just say “try me”. tweet

These times are hard but they will pass. tweet

Thanks for reading our post on Quotes about being strong in your life. Share this awesome set of quotes collection and use our quotes on your Instagram if you like.  Don’t forget to bookmark BoostUpLiving.com and Subscribe to our Newsletter for Fresh quotes Updates in the future.