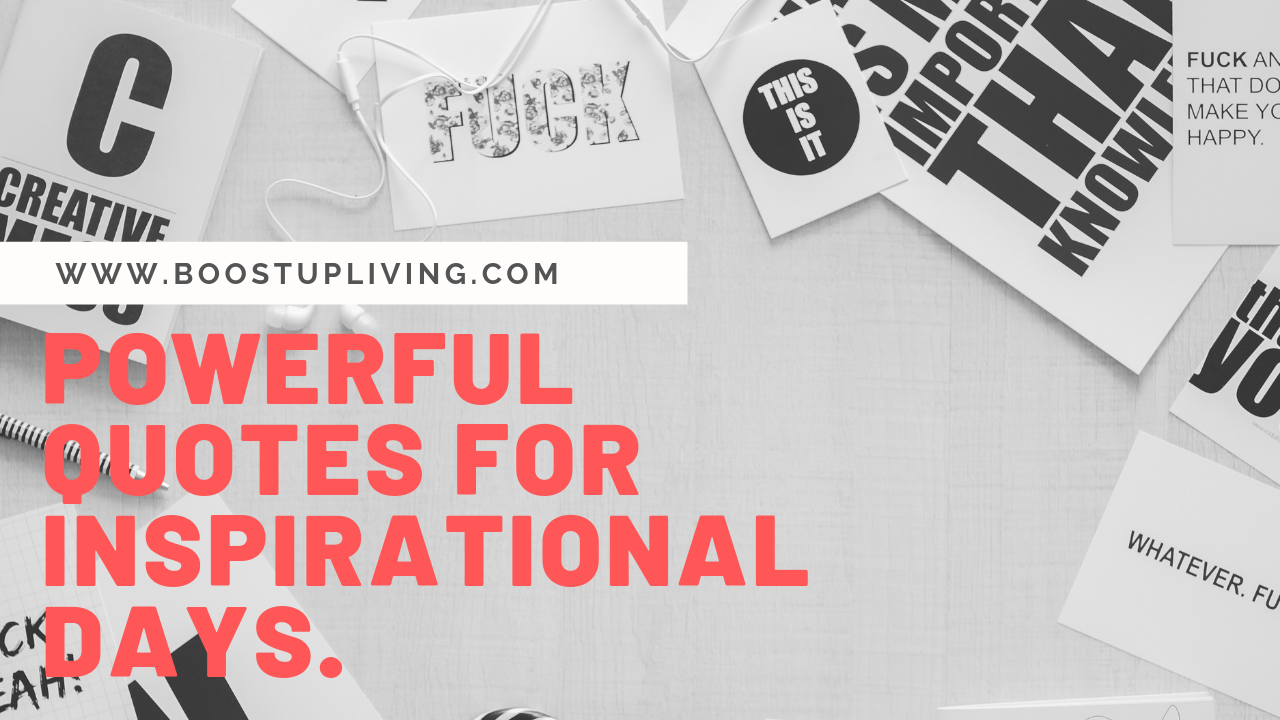 Powerful quotes could help you when there are situations in life which we must have the strength to face difficult situations. Here BoostUpLiving us have collected an awesome collection of Powerful Quotes For Your Life which could help you any day. Let’s begin with the quotes collection.

Do not tell someone about your good side to make the stay. Tell them your worst side and see who stays. tweet

Overthinking is the biggest cause of unhappiness. Keep yourself occupied. Keep your mind off things that don’t help you. Be optimistic. tweet

Before we were talking in words.. Now we’re only talking in silence.. tweet

Not everyone is meant to be in your future. some people are just passing through to teach you lessons in life. tweet

Train your Mind to stay calm in every situation tweet

The same boiling water that softens the potato hardens the egg. It’s about what you’re made of, not circumstance. tweet

Warriors are not the ones who always win, But the ones that always fight. tweet

Be careful with how much you tolerate. You are teaching them how to treat you. tweet

Sometimes life is about risking everything for a Dream that no one can see but you. tweet

If I ever tell you about my past, It’s never because I want you to feel sorry for me, But so you can understand why I am who I am. tweet

It’s better to be a lonely lion than popular sheep. tweet

Just because you don’t share it on social media, Doesn’t mean you’re not up to big things. tweet

The biggest lesson I learned this year is to not force anything. Conversations, friendships, relationships, attention, love. Anything forced is just not worth fighting for, Whatever flows flows, What creashes crashes.It is what it is. tweet

In 2019, I only want to be around the people who love me, Not the ones who pretend they do. tweet

Never be defined by your past. It was just a lesson, Not a life sentence. tweet

Because It’s the only thing that stays when everything and everyone gone. tweet

– Some people only exist as examples of what to avoid. tweet

Sometimes god breaks your heart to save your soul. tweet

I am not open to many people. I’m usually quiet and I don’t really like attention. So if I like you enough to show you the real me. You must be very special tweet

The life that you are living now, is alson a dream of millions. So always be satisfied with your life. Be happy in every moment of life. tweet

Give, But don’t allow yourself to be used. tweet

Love. But don’t allow your heart to be abused. tweet

I keep my personal life quite, So don’t think you know me. You only know what I allow you to tweet

When you truly don’t care what anyone thinks of you, You have reached a dangerously awesome level of freedom. tweet

Stop explaining yourself and telling people everything. You owe no one any explanation of what you do. Your life is yours, Not theirs. tweet

Find someone who is proud to have you, scared to lose you, fights for you, appreaciate you, respects you, cares for you, and tweet

Always remember that your present situation is not your final destination. The best is yet to come. tweet

Thanks for reading the collection of Powerful Quotes For Inspirational Days.

What is your favorite quote? comment us for more image quotes in the future.

—- With Love From Sam @ Boostupliving.com