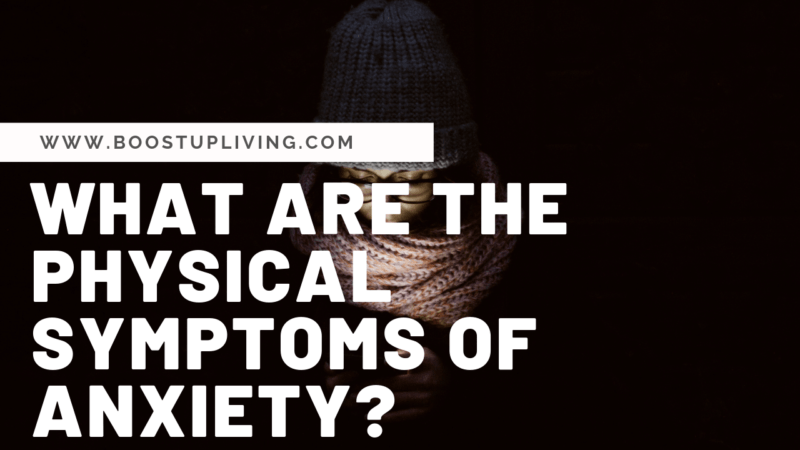 Anxiety disorders are often categorised by their mental symptoms. Intense feelings of unease, worry, and fear are well-known symptoms of both general anxiety and anxiety disorders, but there are also many physical symptoms caused by anxiety.

In fact, these are often more severe than the mental effects, often being debilitating and having an adverse effect on a person’s general physical health. When combined with the various mental symptoms of anxiety, it’s easy to see why anxiety disorders are so overwhelming.

General anxiety often results in people tensing their muscles, so when dealing with an anxiety disorder there is often significant muscle tension throughout the body. These symptoms appear throughout the body, although are most common around the back, neck, and shoulder.

The reason you develop tense muscles from anxiety is that you’re struggling to relax, making the body more tense for longer than it should be.

Feeling dizzy and lightheaded is another common physical symptom of anxiety. Dizziness happens when blood pressure to the brain decreases, so because anxiety usually results in increased heart rate you may find yourself feeling lightheaded and dizzy.

Many people dealing with anxiety struggle to get adequate sleep, even developing into serious sleeping disorders in certain situations.

Anxiety makes you feel constantly worried, making it get relaxed enough for a restful sleep, leading many people to develop poor sleeping habits as a result of their anxiety.

This also causes fatigue and tiredness during the day, not to mention increasing the various health risks associated with a lack of good sleep.

This is a collaboration of anxiety symptoms that can become incredibly overwhelming – many people suffer severe panic attacks that start from shortness of breath. It’s caused by a few things, including higher blood pressure and heart rate, leading people to struggle to properly breathe.

It is one of the more severe physical symptoms of anxiety, meaning it’s thankfully not as common as other symptoms, although it’s very common among people with dealing with panic disorder.

Churning is the stomach is a physical symptom of anxiety but one that isn’t necessarily too negative. However, the entire digestive system is sometimes affected by physical symptoms of anxiety, none of which are nice.

For instance, anxiety brings on feelings of nausea for many, while a general feeling of uneasiness in the stomach also happens in many cases. Furthermore, digestive problems like constipation and diarrhoea can develop over the long-term, which make living a normal life very difficult.

Sometimes people dealing with anxiety simply cannot remain still and relaxed. Restlessness may also cause an edginess that increases feelings of irritation, often leading the person to physical shake or tremble from their anxiety.

If you find yourself dealing with any of the above symptoms then it may be down to anxiety. Consider speaking with your doctor to see if there is a possibility you have an undiagnosed anxiety disorder!

Online Therapy Is Here To Stay – Thanks To the Coronavirus Pandemic